DAY FORTY EIGHT ON THE CAMINO

Last night we enjoyed a wonderful dinner with new friends, pilgrims from south Orange County in California.   A touch of home.  They started their camino in Lourdes France and will end in Fatima in Portugal after joining Sue's  brother and sister-in-law when they enter Santiago in a few days.  They walked together from st. Jean. PdP in France to Burgos  but due to different pace and ages decided to split after Sue needed a few days off due to injuries.  They took the train to Sarria and are walking at their own pace now and enjoying their separate adventure.  Everyone has their own pace and you are encouraged to walk it even it it means letting friends stay behind or walk ahead of you. 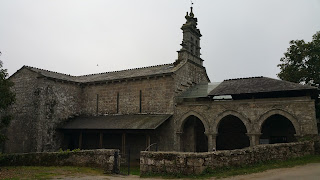 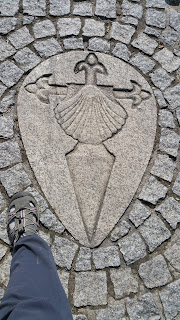 This morning I went out in the dark to see the moon, no moon....we are low enough that we are once again under the layer of fog that spreads it's roof over the land that is known for wet weather patterns.  The many mountain streams are testament to the amount of moisture in the air.

We  ventured out at 8:30 am into light fog and daylight to begin out morning walk.  We were on fairly level trails until we stopped for breakfast at Portos.

After breakfast we left the trail and walked north off trail for less than two miles to a 12th to 13th century church out in the country.   Considered a transitional church between Gothic and Romansque, Jim was thrilled in that the caretaker arrived just as we did and opened up the church an hour earlier than we'd expected.  He also gave us a wonderful tour all in Spanish.  This was an ancient seat of the Knights of Santiago or more commonly known as the Knights Templar.  An hour later we were back on the road south for about two miles and then again on the Camino trail headed east towards our next hotel in Palas de Rei.  Soon we had some rolling hills through woodlands but enjoyed the walk especially after the sun came out and we could once again follow our shadows.

We walked a total of 8.68 miles today in just over five hours with two food stops plus the church.  Took us a bit to find our lodgings. I'd forgotten that it was on the next page of maps as it was located right on the trail but after we walked through the town.  Thank goodness for the Navigator app...it took us right there once I'd thought to use it.

All checked in and will be going to dinner soon here in the hotel.  Tomorrow we walk across the highway and we are on the Camino. ....   buen camino