THIRD DAY OF THE CAMINO

I'm posting two blogs today so not sure how they will enter as they will have the same date.  But the first one posted immediately without going to the bar!  Yeah...no photos makes a huge difference.  Leslie....I really didn't have any jetlag....amazing.

Today I  was up early and for the first time walking primarily by myself.  Different terrains .... many miles in forests and sometimes on roads as I passed through villages.  Sometimes I didn't see anyone for ten minutes or less but over the four hours there had to be at least one hundred pilgrims who passed me walking or on bicycles.  I've only seen one on a horse.

I stopped twice at bars to use the bano (toilet) and always purchase something from them but moved on quickly.  There was a lovely old Basque farmer who was stopping all the pilgrims....giving them kisses and then offered to have his photograph taken with you.  I have  great selfie that I'll try to share.

The weather has been warm and sunny all day.  First day for sunscreen.  Early this morning it was  cool and I thought of the gloves I left at home when trying to lighten my pack.  But soon the sun warmed everyone and the jackets came off.

The last couple of miles was up and down on a broad  concrete path that had been stamped to appear as flagstone...I soon recognized the repeat patterns.  It was at least two miles long. 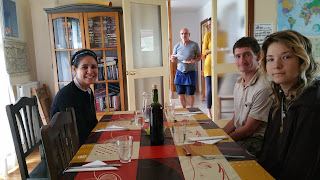 I arrived in Viskarret about noon.  Checked in to the same Pension where I stayed the first night.  Purchased some food for my walk tomorrow at the local store here in the village.  Unpacked before washing my hair and have been enjoying meeting more new people.  A young British man and his girlfriend and the fresh off the airplane from Georgia lady who starts tomorrow  on her  camino.  I've shared with her what I've learned as she is staying at all the same places.

So until the next chapter. ...buen camino

How interesting that the terrain is so varied and that you had many miles in the forest today. Given its location, I had pictured the pilgrimage route as quite arid territory. I hope that hiking on concrete was not hard on you. It must have been quite lovely to finish your walking by noon, with plenty of time to settle in for the day, explore more of the town and meet new people. Are you enjoying the combination of solitude and fellow travelers? To me, it sounds about perfect. And I am guessing that your training is paying off mightily. Go, Martha!!