DAY FORTY FIVE ON THE CAMINO

It was a beautiful Sunday morning, a bit foggy, for our seven mile walk over four hours.   By the time we arrived in Portomarin the sun was bright and hot, glad we were finished for the day.  The town was completely moved stone by stone in the 1960s when they build a dam up the hill to the present site.  The level is so low right now the old Roman bridge and foundations from the old town are  visible along the river.  We walked down to look at all of it after dinner. 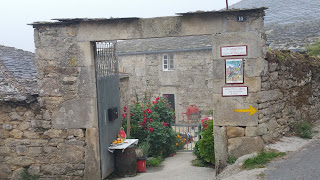 Our walk this morning was a wonderful stroll for the most part along country roads.  Had to stop for a herd of cattle being taken to their pasture for the day and saw a group of people in their Sunday best waiting for the bus to go to mass we assumed.  No huge crowds of pilgrims today which was nice but did see people about every fifteen minutes or so as we walked.  The last mile was a steep descent but on country paved roads.  We took it slow and steady all the way down.  Then back up to the town.

Stopped about half way and enjoyed a rest from the backpacks and had breakfast of tortilla de patatta...the spanish omlette.  Arrived about 1 pm and as we crossed the bridge Jim had his first experience of meeting a pilgrim for the second time. It's always an unexpected joy to see someone again as when you part you are never sure if you'll see them again.  Today we met the couple with the ukele again.

We have  private bedroom tonight but are sharing the bathroom with three other private rooms.  And so ends another day on the camino.