DAY THIRTY EIGHT ON THE CAMINO

I was thrilled that I was able to post those photos yesterday.  We had unusually good wifi...not so today.  It's a lovely little albergue but we have to go two blocks for wifi and food.  But for eleven euros...and very hot showers.....it's good.  And it's right on the downhill of O'Cebreiro so we can watch the pilgrims who are still coming down in the hot sun.  I see many who walk past five o'clock in the afternoon.  Today I saw a pilgrim riding a recumbent bike, I'd heard about him earlier. Also saw the three women riding horses, no gear so they are probably on a tour with their baggage being transported.  But they were wearing proper riding clothes.  I also saw them yesterday evening. 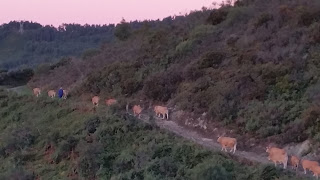 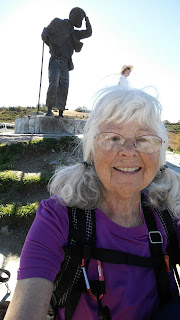 Last night I  was able to eat at 6 pm which was nice.  Then to bed early.  I discovered my roommates were all French friends traveling together.  They were very nice but I soon discovered all seven had head colds and snored.  I took a benedryl pill, put in my ear plugs and tucked my head into my sleeping bag.

Up early this morning, I was out at dawn which is always nice but chilly for the hands.  But the sun comes over the mountains soon and then we're shedding jackets.

Today I walked 5.11 miles in three and a half hours including a stop for breakfast at the top in the village of O'Cebreiro.   There I also saw the mother and daughter from Seattle.  I met them three days ago and last night we talked as they came through the village where I stayed.  They were walking on to O'Cebreiro to spend the night.  When they arrived they found that there was no beds any where in the village.  The mother takes a blood thinner and had had a bad reaction the day before and she'd had to go to a hospital for an infusion.  So they really needed a bed.   Suddenly two glowing American girls walked towards them and said "we've had our showers and feel so great we've decided to walk further this evening!  Would you like to have our room."   The camino provides is a saying we hear all of the time....and it does.  We call these girls camino angels.

We walked together for awhile but they are going all the way down the mountain today so they were soon well past me.

The walk up to O'Cebreiro took me about ninety minutes.  I climbed from 3784 ft to 4560 feet at the summit.  Slow but steady pace to the tune of the cow bells that were ringing nearly all the way up.  They were on a trail below me and finally entered the road I was on and went past me with the three farmers who were with them.

After breakfast I continued on the green trail through the forest.  There was an iron cross on the hill but somehow I missed the turnoff but while stopped for photos I saw it behind me through the trees.  Too far to go back to the narrow path that I thought might have taken me there.  But I did get a good photo.


When I reached Alto San Roque at about 4200 ft there was a monument of a pilgrim that everyone was doing photos at.  I took a selfie but the best one has a pilgrim coming out the top of my head.  Oh well.

Soon I was through the next little village and before I knew it I'd arrived in the village of Hospital.  So named because in ancient times there were hospitals here to care for injured pilgrims.  Now the village church is closed and there are two places for pilgrims to find a bed and one place for wifi and food.  Definitely one of those places you'd miss if you blinked as you drove past.

I arrived at 11:30 am and had to wait on the porch until 1 pm to check in, but nice bench and great view.

The beds are good...only 20 in one room.  But food and wifi at the bar.  It's nearly 5 o'clock and only a couple of beds left.  As we get closer to Sarria it will become harder to find beds late in the day.  Jim and I have pre reserved all of our rooms for after he arrives.  I arrive so early and a single bed in the dorms is pretty easy to do.

"Slow but steady pace to the tune of the cow bells that were ringing nearly all the way up...:" what a lovely image. Next time I have to ascend 800 (or more) feet when I'm hiking, I will imagine cow bells ringing me upward. Has anyone asked you about the Pope's visit to the United States this week? Onward and upward, Leslie