DAY TWENTY ON THE CAMINO

Today I completed 213 miles of the 500 miles  that I will walk by October 8th.  A milestone of sorts.  We also began walking in the Meseta; a desert like area that we will be crossing for several days to come.  We are fortunate in that we are having cooler weather during this time. 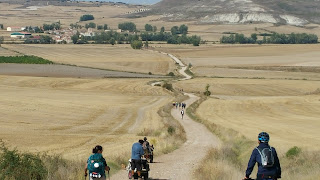 Our day started early at 7 am as we headed out of the city of Burgos.  Loved taking photos of the city with the lights still on.  It was several miles before we actually left the city limits.  I'm walking with Katia who I met on my third day.  Interestingly today we met the young couple who were in the same Pension that night we first met, on the road.  Always fun to met someone again but that a big part of the camino.   Katia and I are going to walk three days together and then we'll see.  She is 40 years old and definitely a faster walker than me so I have to pick up my pace to stay with her.  She is originally from Brazil and has no probably with the language.

Our first five miles was very level but after we stopped for breakfast we hit the hills and the beginning of the Meseta.  Along the way we discovered a couple who has walked over seven thousand km in the past year walking from Turkey to Santiago.  He is from Portugal and his wife who is maybe five feet tall at the most is Spanish.  They each have a cart with wheels that they push or sometimes pull with a harness around their waist.  Also have two tiny dogs.  Katia spoke their language and got the whole story.

By 12:30 pm we'd arrived in Hornillos del Comino.  My backpack was waiting at an albergue where I'd made a reservation.  I'd told Katia about the Casa Rural El Molino that is located near the village.  I'd called last night but gave up because of language difficulties.   No problem...she called and got us a booking.  They would pick us up in town as soon as I got my bag.  This is about six miles out of town and was a Vinyard at one time.  The owners are the parents of the girl who met and eventually married the grandson of Martin Sheen during the filming of the movie "The Way".   More expensive than usual but then we're spoiled by the special prices for the pilgrims.

Interesting fact is that we now think that the grandson and his wife own a  Casa Rural right in town and we could have stayed there and probably cheaper.  But we do have sheets on the bed, fresh towels and our own bathroom.  We are sharing a room.

We've done our laundry and have it "blowing in the wind" to dry.  Doing our journals and waiting for the dinner at 7 pm.    There are seven of us and most seem to speak English.

The wind is blowing and the prediction is for rain tomorrow...so we need your prayers.   It will be a long 14 miles if it's raining.  Buen camino

Prayers proceeding for a calm, dry (except for maybe a mist now and then?) day for you Friday. (Here in the Pacific Northwest, as you know, we are cherishing every drop of rain that comes...and some finally has, in dribbles, over the six days.) Congratulations on having completed 213 miles...what an accomplishment!! And as you walk, it is so interesting to read about your ongoing contact, and developing friendships, with fellow pilgrims. You seem to have adjusted so well to life on the road and communal life in the albergues. Have you always been a resilient person? Once again, you are a fine example for us all! Fondly and with much respect, Leslie in Oregon

P.S. Martha, if you feel comfortable doing so, please email me your Instagram site's name, so that I can look at the photographs you are posting there.