DAY THIRTY THREE ON THE CAMINO

Last night we had a wonderful dinner with all foods prepared from the owners garden.  Mostly vegetables. .. a pureed soup, salad and quiche followed by lemon pie.  We had a young man from Germany who is walking in thanksgiving for surviving cancer.  A Belgium man who has taken five months off work with no salary to walk from his home near Brussels though France (by way of Vesalay. .. a favorite church of mine) and into Spain.  He has walked well over one thousand km to date and still has a few more to go.  We also had two french ladies along with Pauline and myself. 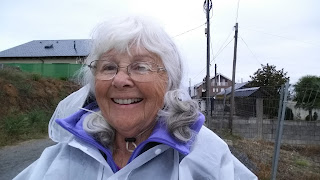 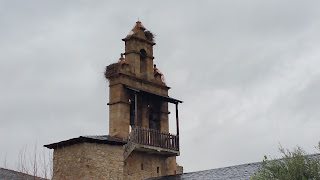 This morning Pauline caught the 6:45 am train to Sarria and will try to complete that part only due to her knee and blister problems.   I missed her company today

My day started early after another big breakfast which is so unusual.  Nice to have cereal along with the breads.

By 7:15 am I was on the street with my headlamp...there was some light but not much.  Soon the Belgium man was with me.  It was two miles to the city edge.  By then there were many pilgrims walking and the rain had begun.

Level walking and light rain for the entire ten miles.  I stopped midway and had some hot chocolate and a rest with my backpack off.  The worst was having the plastic poncho on all day.

Saw some beautiful churches,  some with stork nests on top.  Pumpkin patches, many vinyards,  wine tasting rooms, apple orchards, and more unusual flowers.  This was a nice day with two villages and one town to walk through before I reached my destination about four and a half hours later.

The skies opened up just as I arrived in Cacabelos, my destination.  The albergue La Gallego was at the end of town so I had to splash through many blocks of ever deepening rain puddles before I found my lodging.  It is part of a regular hotel and very nice.

I'm in a two bunk bed room with an in suite bathroom for the four of us, all women.  One German,  two hungarian and me.  The cost was ten euros for each of us.  The rain has continued all day and we're all trying to dry our gear for tomorrow when more rain is predicted.
Buen Camino