DAY THIRTY NINE ON THE CAMINO

It's another glorious day in Spain.  Cool in the morning and warming up fast when the sun slides above the hills.

Started walking at daybreak.  I was awake at six and went outside to see the sky which was alive with brilliant stars.  They looked like you could reach out and touch them.  Spotted the big and little dippers and more.  The north star was so bright I thought it was an airplane!

But I thought it best to wait until I had enough light to spot the cow pies I knew were in the roads and trails I was traveling today.  Left at 7:15 am and three and a half hours later I'd arrived at the albergue Reboleira in Fonfria.  It was recommended by another pilgrim ahead of me and they were right, one of the best I've stayed in during my journey.

I hadn't remembered we had one more peak on the O'Cebreiro Stage,  but once more this morning the yellow arrows pointed up and we climbed back up to 4416 feet at Alto do Poio .   Good news was it had a bar where many stopped for breakfast including yours truly.   There I met a lady from Iowa who is traveling solo and we enjoyed our break together.
Leaving the area I finally started my descent of the mountain.   I've still got another five miles tomorrow, and that section is the steepest.   Think I'll wait for daylight again tomorrow.

Last night I enjoyed the company of three good friends from Scotland for dinner.  They come each year and walk for a week, starting from their stopping point each time.  The plan is to finish next year. 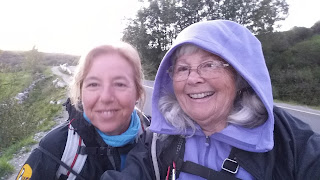 Lots of pilgrims arriving.  I'm also looking for friends who I know are behind me hoping they'll catch me on these slow stages.  I've been thinking about the various pilgrims I've met over the last weeks.  They've been from Spain, France,  Germany, Italy,  Portugal, Belgium, Netherland,  Sweden,  Russia,  Romania, Hungary, America,  Canada, Mexico, Korea,  China, Chili, Brazil,  Venuzala , South Africa,  New Zealand , Austrilia, Tunisia and those are just the ones I can remember easily.  It is a coming together of people from around the world for a wide variety of reasons and gaining a new understanding of the world around us.  It's an amazing journey, so much more than I ever expected.
Buen camino

Martha,what a wonderful, lifetime of memories this trip has given you. So glad Jim will be with you soon to experience part of this journey. Your blog has provided us a peek into this amazing walk. Thank you. Judy