I thought I was the only still on the trail that started early in August but today we met the young German man who I've stayed with and/or seen in several villages.  I introduced him to Jim and in talking I discovered he started from st. Jean two days before I began.  He has the time right now and is going slowly and enjoying the journey. 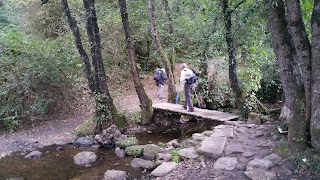 Today was very crowded, three large tour buses deposited about two hundred people on the trail at the 100 km mark so that they could do the journey with no backpack as rapidly as possible. They will do about 25 km per day and finish in santiago.  Some were almost running.

It was mostly uphill and we struggled a bit but it was good that we only did twelve km, about nine miles in four hours.  No places to really stop other rocks along the trail.  We had a surprise concert by a man in full kilt playing a bagpipe...took a video which I will post on Facebook tomorrow when we have wifi.  Yes, we're in a lovely place in the mountains but there is no wifi.  With our T-Mobile we can do text and limited email, but that's about it.  Definitely no photos. 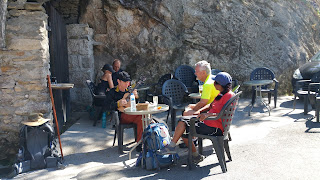 The hordes of new pilgrims also stopped here for refreshments,  so it was very busy for several hours.  One that stopped, and they were not on the bus, was fun to talk with.  She was on her second Camino and had started from St. Jean and he'd just arrived yesterday in Sarria like Jim.  They were from Minneapolis and he was very into Art so he and Jim had some deep conversation.  I asked what he was carrying in his backpack.  The neck of the case was protruding out the top.  It was a tenor classical uklela that he always travels with.  We talked him into playing for us and I also have that video for you tomorrow.

A large beer and we relaxed and enjoyed the afternoon.  It's now time for dinner and I will post this tomorrow. Buen Camino